Some Show Elements that were used by Tinman Jones 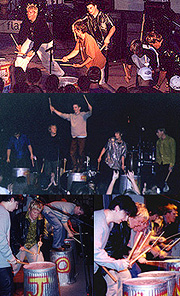 The one they will be most known forever is their Trash Can Routine. This started in 2001 when they decided that it would be a great music break to put down our instruments and beat on some trash cans (think STOMP meets DRUMLINE). The first routine started as a battle between drummer Mark Toombs and the other members of the band. Three metal cans were visible as Matt, Bryan, Don and Keith keeps a cadence. Mark comes out and challenges Matt to a beat dual. Matt goes down. Next Bryan tries to keep up, makes it a little further, but meets the same fate. Keith stays with Mark just a little longer, but can't keep up for long. Then Don (who plays a percussion kit when not rapping) takes the challenge. The two battle beat for beat. So Mark, trying to up the ante, pulls out a pair of sparkling sunglasses with lightly tinted lenses and then plays a complicated pattern. Then Don pulls out matching pair of sunglasses with even darker lenses and copies the pattern. The beat turns more rhythmic as the others join in. At the right moment the three trash cans are picked up and slammed down as the guys yell "TIN", revealing the letters T-I-N on the trash cans. Still in rhythm the cans are turned and slammed again to reveal the letters M-A-N while they yell "MAN". Once again the cans are turned, now spelling out J-O-E. With confusion all over their faces they scratch their heads to figure out how to solve the problem. Then Bryan gives a four count and the last two cans are picked up high and moved over uncovering two smaller cans that had been hidden beneath. Now the five cans spell out J-O-N-E-S. Now with five cans for five guys the grand finale can be performed. 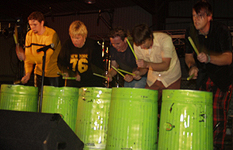 Later and all the way to the last show the routine was changed to having five cans painted flourescent greenish yellow, allong with the sticks. During the finale all the lights went to black and blacklights came on. So you see glowing cans and sticks with the routine including playing on each others cans and slapping sticks together. The downside to this was that the cans were talked about more than the songs. But whatever got the attention was all that matters when it comes to sharing Christ.

This element started with the song "Look" from the Hurricane album. When the verse to the song hit the first word the band would freeze inches from the edge of the stage, grouped together stage left or right (depending on the verse) staring into the audience. No moving (exept for fingers for guitar players), no blinking, no smiling, nothing. Just an intense stare. When the song moved to the pre-chorus the band would sweep in unison toward the opposite side of the stage and break into a high energy rock fest for the chorus. After the bridge the band locked into a prolonged freeze while hammering a single chord, again inches from the stage. The only movement on the stage was the drummer who was going insane on his kit. At the right cue the band started to bounce ever so slightly to the beat of the music, increasing the bounce until they were fully jumping. By this time the crowd has joined in and the whole place was bouncing together until the band ends by kicking into the next song.

For the song Superhero, five masks were purchased. This was used for only a couple of years and came right after "Look". So the sequence above had the added twist of, during the long "stare", each band member in turn broke from their freeze to pick up their mask that was always an arms length away. The mask was put on and the stare was resumed, until you had all five band members staring with a mask on. One version of this routine had Bryan pick up the Mark (the drummer at that time) mask and hold it out to the audience and then present it to Mark. If he wasn't please with the crowd response he would refuse the mask and Bryan would hold it up to the crowd again, a few times until the crowd was in a frenzy and then all would lock back into freeze mode.

To illustrate a song called Bright (that never made it onto a recording), and as part of the end of the show finale, the band would leave the stage as if the show was over. A track would begin to play and then the band would slip back on the stage in total darkness. They started the song and then later in the song blacklights came on. The band all had on flourescent orange jumpsuits and glowed as they finished the song.

Later the suits were changed to a metallic looking silver material. When the band came out in darkness they turned on mini-mag lights that they had strapped to goggles. So through the heavy fog you saw what looked like five sets of headlights. When the chorus of the song hit, bright white lights come on the stage making the suits reflect.