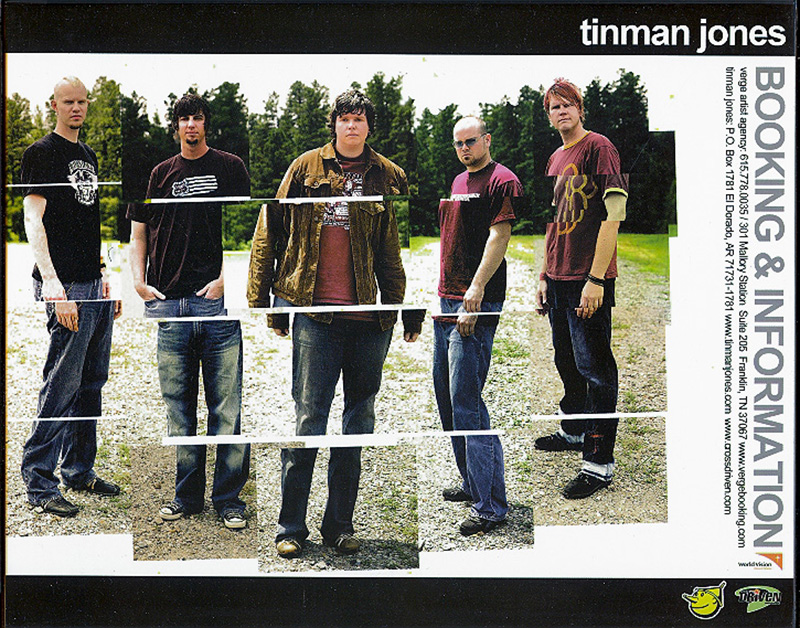 2004 brought an intensive tour schedule, playing as far as New Mexico, Michigan, Maine and Florida. TMJ’s label partner had opportunity to sign them up for a “battle of the bands” at an annual event at Disney World in Orlando, Florida. In over eight years, the band had only played one battle of the bands type engagement and did not like this format. Their message was meant to be shared and not competed. But since this opportunity was at Disney World, and the winner of the contest would be invited back for a paid concert (yes, the battle was a no paying gig), it seemed something of a must. The band played their heart out for their 20 minute set and the judges did something they had not done in the history of the event. They declared a tie between Tinman Jones and one other band, both being invited for a concert at a later date.

TMJ continued to criss-cross the states, all the while writing new songs to prepare for a future recording. In August, the band toured their way to Orlando for their show at Disney. While back stage preparing to go on, Bryan shared he had been offered a teaching opportunity at a college. He was feeling inclined to take it. Keith shared that he and Don had a conversation while up late one night driving the bus about feeling a release from the calling that held them to the road, but didn’t know how to bring up the subject to the others. Now it was clear, the three remaining founding members of the band felt nine years was long enough on the road.

The three made a plan to play their remaining schedule until the end of 2004 and park the bus. The matter was discussed with the newest members of the group and the plan was established.

When the announcement was made, and a date was set for a final show on December 31, 2004, love poured in from all over the country. The final show was held in Magnolia, Arkansas, and fans from as much as 12 hours away came to be part of the historic event. The band sold out of every CD, T-shirt, sticker, drum stick and all other merchandise on the table. After the merchandise was gone, fans purchased the table cloths, display stands and anything else we would make available. Tinman Jones felt the love from these gestures and knew every mile, every lyric, every beat and strum of guitar was well worth the effort.